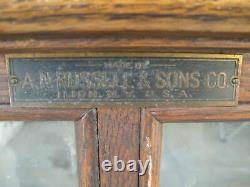 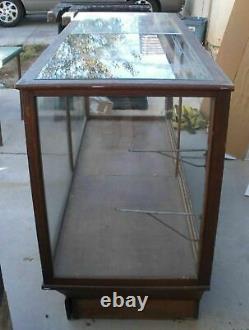 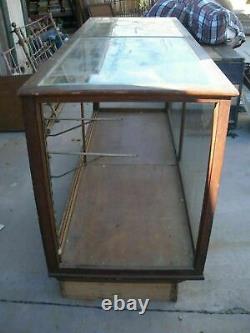 I believe it to be from perhaps the late 1800s to early 1900s? For refinishing or For using with minor repairs. 72" long x 42" high x 26 deep. It seems to be all or nearly all original in the wooden framing. Missing piece of glass on one side. It has tempered pieces of glass on top, One beveled edged and one plain. Open back with upper and lower slots for sliding glass doors. Still has original kick board on front, No kick boards on the sides. The wooden frame is intact with no broken parts.

Shows normal wear and scuffs from use and age. Of which is somewhere around a century or more in age.

This case would look even more incredible, If properly restored or refinished. This Incredible piece came with us from NH. Where it was part of our Antique Shop / Country Store there. Samuel Thomas Russell was born May 28, 1853 in Fairfax County. Albert Russell, born in Kirkland.

Oneida County, had moved to Virginia at age 21 to establish a business there. He met Mary Hatch, born in Sherburne, N. Who had moved south with her family in 1840 and they were married in 1850. At the beginning of the Civil War, Albert moved his family north to work for E.

At age 20, he went to work in his fathers lumber yard known as Brill and Russell, which began in 1871. When the firm became A. Russell and Son in 1881, Samuel took over as general manager. The business was both a lumber yard and a factory built to manufacture store furniture and equipment and both grew under his administration. The business expanded to Frankfort and brother George became the manager there. While working with his father, Samuel began branching out. At the time of the failure of E. Remington & Sons, a company called the Remington Arms Company with Trustees Samuel T.

This sale was not granted by the courts. Samuel was one of the five men who approached the new Remington Typewriter owners in 1886 to encourage them to stay in Ilion. This last endeavor was a success. When the Ilion Savings and Loan was organized October 3, 1888 to help residents build new homes, Samuel was named the first President and he would serve in this job until his death.

He would later be one of the nine men who organized the Manufacturers Bank, opening May 4, 1908, and he was president of this bank. Became the general manager because Samuel was busy with other companies. The Tucker File and Cabinet Company of Newark. Opened an Ilion factory in 1901 naming Samuel treasurer of the Company and general manager. Tucker File moved into the part of the four-story Coleman Carriage & Wagon Company building to make office furniture. Both the Coleman Carriage & Wagon Company and Tucker File had the same Board of Directors. The Clarke and Baker Company of New York City were sales agents for Tucker. Sales grew rapidly and in 1907 a merger of Tucker with Clarke and Baker was made with Samuel still general manager.

He was president of the Ilion Lumber Co. Incorporated in 1911 and held that title until his death.

Photograph from Souvenir of Ilion (1904) of S. Helen Augusta (1892-), and Joseph Jones (1893-). These children all had excellent educations, becoming a teacher, businessman, librarian and a minister, respectively. Samuel Russell also took his civic responsibility seriously. He was a trustee of the Village of Ilion. He served as Supervisor of the town of German Flatts, which meant he was on the County Board of Supervisors in 1885. He was a trustee and president of the First Methodist Church. He was the President of the State Lumber Dealers Association as well as Secretary-Treasurer of this state-wide group in the 1890s.

He was active in the Masonic organization, and a member of the Ilion B. In 1891, when Clarence Se A. Samuel's work and interest in the Boy Scout program is recorded in the accompanying article.

His gift in 1917 of property on White Lake to the Boy Scouts was supplemented in 1923 with a gift of 160 acres of woodland to the Village of Ilion for the Albert N. Russell Park, which is an important part of Ilion in 1993. Samuel served on the first Ilion Park Board.

May 25, 1929, of blood poisoning which it was suspected he picked up on a recent California trip. The Methodist Church he served so long could not accommodate all the people who wanted to pay him honor. The fourteen honorary bearers and six active bearers were the leaders of the community that Samuel Russell helped to create and shape for the future. Please review the pictures & measurements carefully. A few aged to perfection & imperfections from some.

Mostly estates & previous owners. Please note that this item unless listed as new. Is not new and will show moderate signs of wear commensurate with age. So please expect some signs of normal use & wear appropriate to age.

As much as possible, slightly dusted off but not monkeyed around by neither the Mr. Please be rest assured, condition and. Descriptions to the best of our knowledge & provided inspection photos. Your pursuit of satisfaction & happiness is our goal.

It is important you analyze photos for your inspection. Feel free to super size the photos. Check the listed dimensions & gauge with your tape measure. Some pictures seem large, with dark spots or shadows. Shot up close & enlarged to show details and not meant to deceive. ITEMS FOR SALE WILL NOT BE NEW. And can and may show signs of wear commensurate with age. Any wear, flaws and/or defects are disclosed & photographed.

To the best of our ability. Colors may vary slightly due to light reflection. Background, angles, your computer monitor, device. Please read & view photos carefully. We'll try to do our best to work out a fair solution for all concerned!

Thank you for your patronage. Listing and template services provided by inkFrog. The item "Antique Oak Glass General Store Display Showcase NY Made A. N Russell & Sons Co" is in sale since Monday, March 18, 2019.

This item is in the category "Antiques\Mercantile, Trades & Factories\Display Cases". The seller is "u-oh-me" and is located in Adelanto, California. This item can't be shipped, the buyer must pick up the item.